This is the time of year – in the midst of the peak autumn glory – that I start to think about hibernating.  I feel the creeping darkness shortening the day, the cold wind nips at my ears, and I have to scrape the car windscreen for the first time since last winter.  I take a good look at the piles of orange and brown and yellow fallen leaves and I wonder whether I, too, could make a cosy den for a few months.  I imagine hibernation being the most peaceful, snuggly thing.  Months of snoozing and dreaming followed by waking up to springtime! In reality, though, it is probably quite different. 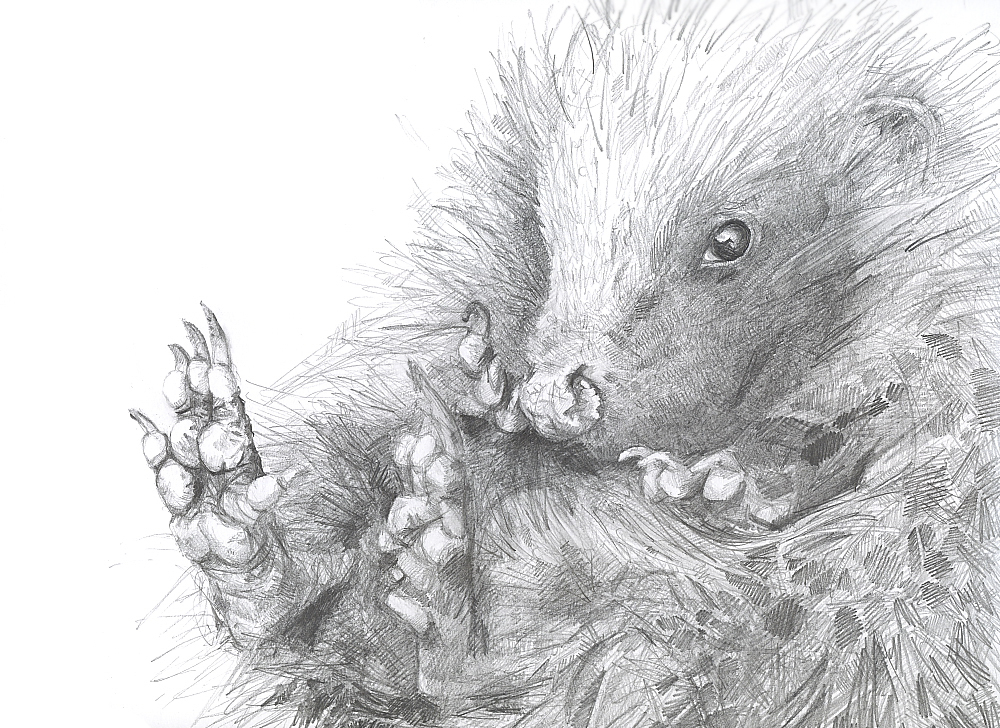 Hedgehogs are said to be Britain’s favourite mammal.  They are the kooks of the animal kingdom: covered in spines, snuffling about, and sleeping for half the year.  In the autumn, it’s a race to get as fat as possible for the hedgehogs.  They have to weigh between 500 and 700 grams in order to survive the winter.  They achieve this weight by gobbling as many grubs as possible.  Hedgehogs are friends to gardeners because the grubs they gobble are also common garden pests: slugs, caterpillars, leatherjackets, earwigs.

Our spiny quirky friends are specialists in existing on the fringes.  They make their way round the edges of things – woodlands, fields, gardens.  They travel by night in hedgerows and rough grassland.  During the day, they construct nests by swirling piles of leaves and twigs round themselves.  Hedgehogs have neither a fight or flight response: they just curl up into a ball.  The only predator brave enough (or hungry enough) to take on 16,000 spines is the badger. [Unfortunately, curling up into a ball isn’t helpful when the predator is a car]

These off-the-wall hedgehog behaviours explain some of the reasons why their populations are declining so drastically in the UK.  Larger field sizes, unfriendly fencing, roads, and less hedgerows have broken up their corridors of travel.  The use of pesticides is reducing their food sources [a German study has claimed that there has been a 75% reduction in biomass of all invertebrates].  The big changes will come from countryside management, but as gardeners we can help a little by leaving some nice leaf piles and creating little hedgehog-sized tunnels in our fences.

Piles of dead leaves provide essential shelter and food for toads and insect as well as hedgehogs.  The leaves also release their nutrients into the soil as they decay, so it’s a win-win for gardeners. 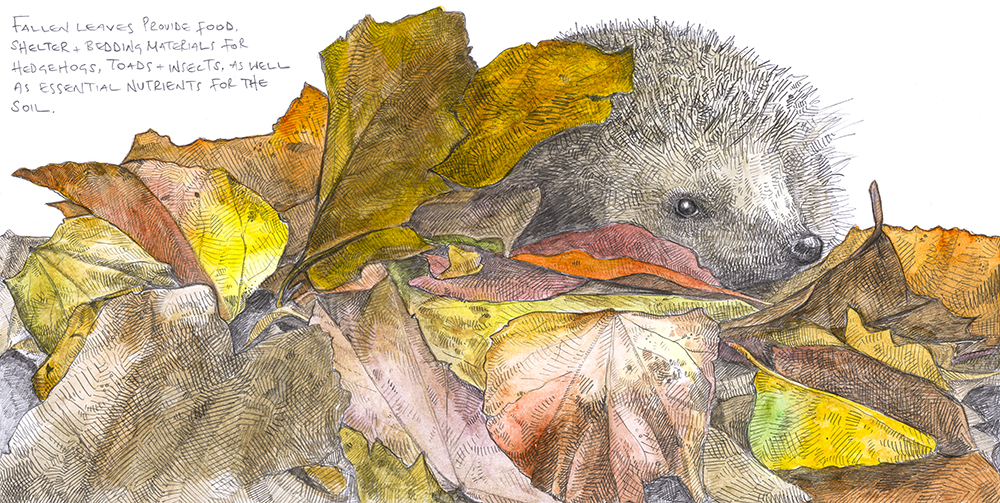 So is hibernating actually a delightful snooze?

In order to hibernate, I’d have to find a safe spot to make my winter bed.  Hedgehogs favour leaf piles, stacks of logs and the dark crevices under garden sheds.  I’d prefer my memory-foam mattress, most probably.  And a duvet.

I’d then have to enter a state of inactivity in which my heart-rate and breathing were slowed and my body temperature and metabolism dropped.  Hedgehogs reduce their heart rate from the usual 190 beats per minute to just 20.  The dormouse, another hibernation advocate, drops her body temperature to just a few degrees above freezing.  [Dormice eat so much during the summer to prepare that they reach twice their usual body size!]

Once the hedgehog goes in to hibernation – any time between October and April – it doesn’t mean it can stay there all winter.  It might have to wake up to find food or go to the loo.  Their bodies will also wake them automatically if it gets too cold and there is a risk that the hog might freeze.  Being woken up because you might be about to freeze sounds very grim.  As does having to wake up to go to the loo when it’s the middle of winter and you’ve been asleep for weeks.  Learning this has put me off the idea of hibernation a little.

In conclusion, I don’t think I’ll try hibernating this year

Apart from anything else, I wouldn’t want to miss Christmas. I bet if hedgehogs had tasted mulled wine and mince pies, they’d think twice about hibernating too. 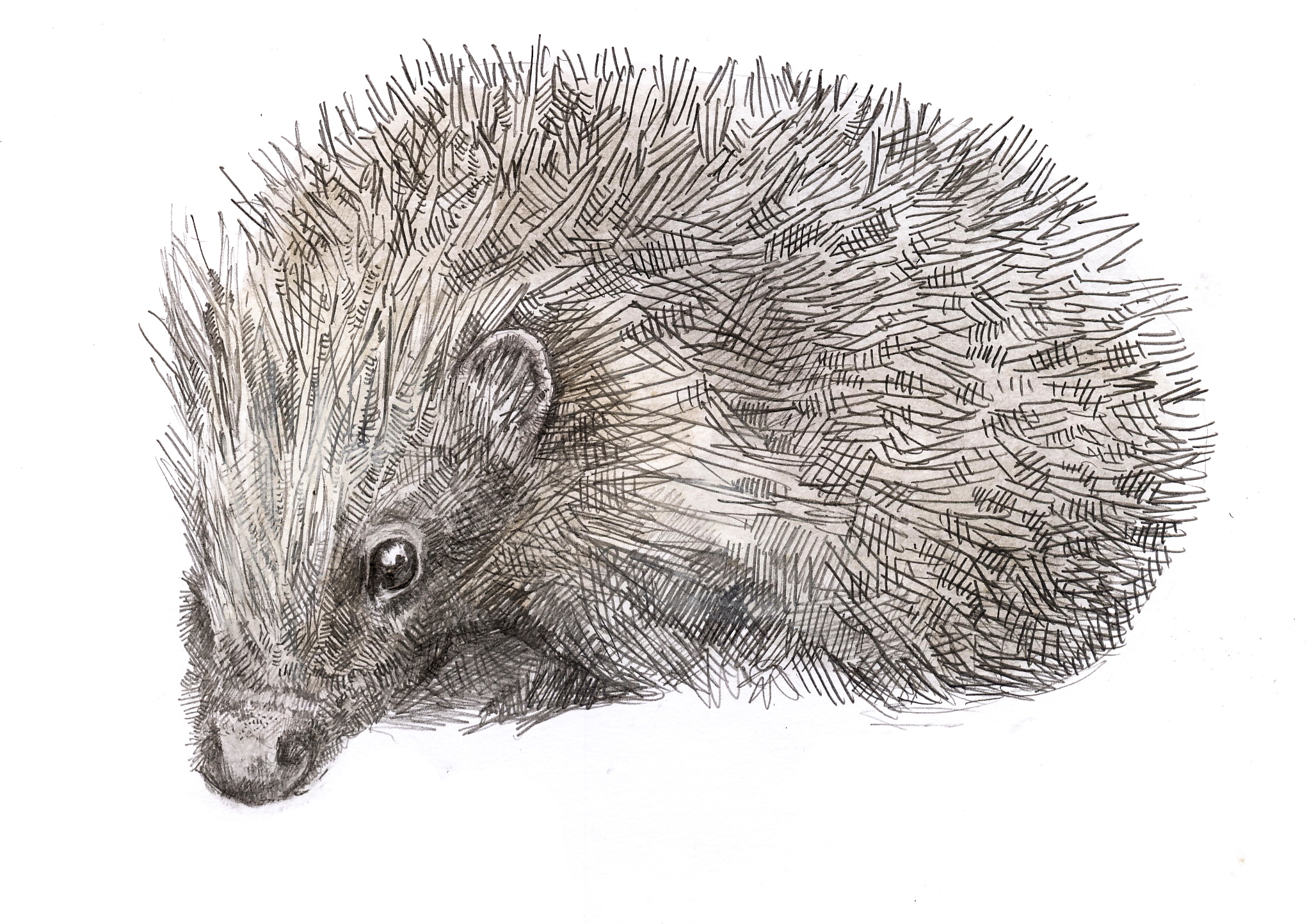 You can find lots of hedgehog products in our shop, including the Leaf Piles wrap-around card and the Curled Up Hedgehog card.